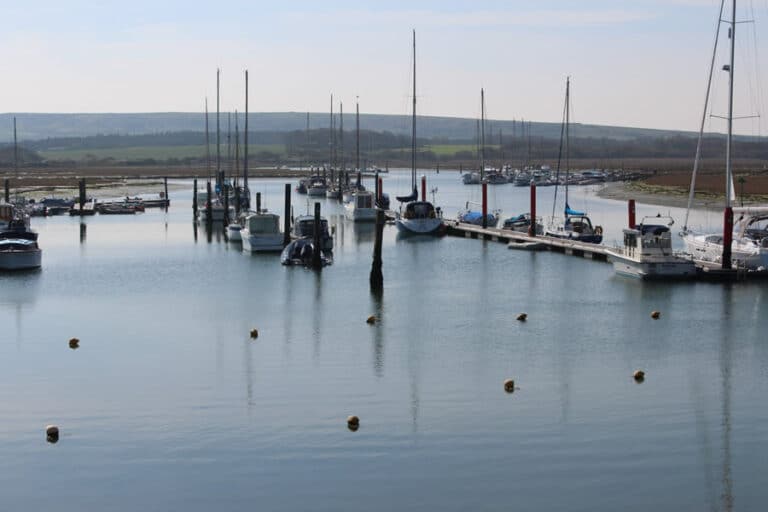 Just across the Solent from Lymington lies the small town of Yarmouth on the Isle of Wight – one of the most historically significant settlements on the island. Originally named Ermue, or muddy estuary, it played host to Ethelred the Unready in the 10th century. The Normans laid out the town in its current grid pattern.

Yarmouth’s importance led to it being invaded and destroyed on more than one occasion. Rumour has it that the church bells were taken off to Cherbourg after one such raid. In 1547 king Henry VIII commissioned the building of Yarmouth Castle in an attempt to protect it from the French. It is possible to tour the castle and explore its history and that of King Henry’s Solent fortifications.

If you visit the church located in the corner of the town square it is still possible to see evidence of the town’s former battles. Just to the right of the alter there is statue of Sir Robert Holmes. At first glance it looks a little odd and not typical of an English gentleman from the island. What actually happened was that a French ship was captured and on it was a newly commissioned statue of Louis XIV of France. It was, together with the sculptor, being transported to France so the head could be carved in the French emperor’s likeness. Sir Robert saw it as an opportunity too great to pass up and so kept it for himself forcing the sculptor to fashion the head in his own likeness. These days, the French and all other visitors are welcomed with open arms.

As well as the church, there are numerous buildings and sights to see during a walk around Yarmouth and the surrounding countryside. A walk along the river Yar past the Old Mill House is delightful. In fact you could even take the dinghy up the river for an early evening potter taking in the natural beauty and wildlife.

Another place to enjoy a walk is along the Solent shores from the Western corner of the harbour. Dinghy over to the Sandhard pier and then walk along the shoreline to Victoria Fort and even on to Albert Fort.

There are pubs from the 17th Century, restaurants and all manner of choices when it comes to lunch or dinner in Yarmouth. As with all the places we visit your skipper can provide suggestions as to where to dine.

Close to Yarmouth is Hurst Castle, another one of King Henry’s fortifications. We can anchor off the castle and tender you ashore to enjoy and explore. Alum Bay just inside the Solent from The Needles. Alum Bay is famous for its multi coloured sands. It is also home to the Needles Park reached by a dramatic chairlift. In fact the chairlift was designated part of the route for the 2012 Olympic torch journey across the UK.

Yarmouth harbour has welcomed mariners for many years and it a traditional starting point for voyages across the English Channel to France and many a sailor has been glad of its refuge on returning to England following a less calm crossing.